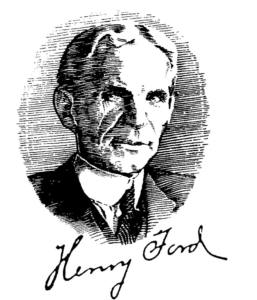 The great man died in bed at his beloved Fair Lane estate in Dearborn, Michigan, a few minutes before midnight April 7, 1947.

Henry Ford was 83 and had made his mark as the most productive native son in the history of the United States. As Edgar A. Guest said in his stirring radio tribute, “We are all his debtors now. There is none of us, rich or poor, in humble or high place, whose life has not been bettered by his labor. He came into this world when the backs of men were weary and heavy laden. By the dreams he had pursued and achieved, the burdens of drudgery were taken from the shoulders of the humble and given to the steel and wheel.”

This was a fitting eulogy for a man whose near saintly vision of a simple car for the masses so transformed the world.

In the January / February, 1985 issue, The Restorer Magazine ran an article about an activity put on by the Santa Clara Valley (California) Chapter of MAFCA where they had assembled 72 running Model “A’s, all owned by club members, in one location for an outing. They challenged any club to “Match or beat our numbers – Bet You Can’t”. I read this article one evening and then went through my Ft. Worth club roster and counted over 300 Model “A’s listed. I thought “if only 1/3 of them ran……”

The Model “A” Club Board, consisting of President Milton Trojan, 1st VP Jim Diggs, 2nd VP Randy Minton, Treasurer Larry Howard, Secretary Bill Blackwell, Tour Chairman Mark York, Activities Chairman John Patterson, and Member-At-Large Nate Berman was having the March meeting shortly thereafter. I discussed the article with the Board and before the meeting was over we decided to accept the challenge with a goal of 100 cars. J. B. Moates was asked to serve as the Tour Director.

Sunday, September 8, 1985 was selected as the day to have the activity. It was after Labor Day and most people were back from vacation, the Cowboys were playing a Monday night game, line-up was scheduled until 2:00 P.M. so everyone would be out of church. There was no reason for anyone not to show up. By coincidence, it happened to also be Grandparents Day and that became the theme of the tour and it continues today. The first two choices for location were the Stockyards area and Sundance Square. The Stockyards did not show much interest, but J.B. Moates and Milton Trojan sweet-talked the City Center Development Co. folks into hosting it, including allowing us to block off Main St. in the Sundance Square area from 6:00 A.M. until 8:00 P.M. The planning commenced and continued the next few months with J. B. and Milton overseeing the activities of the Board members and a handful of volunteers from the membership.

On July 21, 1985, the Wisconsin Chapter of MAFCA beat “The Santa Clara Challenge” by fielding 76 member cars at The Greater Milwaukee Car Show. The challenge was issued again, this time by Wisconsin. Then, a short seven weeks later…………

At 6:00 on the morning of Grandparent’s Day, 1985, Jimmy, Ronnie, and Mark Kuban, with help from other members, were setting out barricades to block off two blocks of Main St. in the Sundance Square area. The board had cussed and discussed the parking layout to get the best photo. Milton Trojan, Randy Minton, Larry Howard, and John Patterson made sure that all cars were where they should be. The registration tables were staffed by Joyce Trojan, Kay Patterson, Shirley Moates, Rita Bovill and other volunteer members. When Main Street was full, the overflow, along with Mitch Stenzler’s “AA” Fire Truck, was parked in the lot in front of the Longhorn Mural. At the 2:00 deadline, we had 124 member owned Model “A” Fords and 5 guest Model “A’s, all parked in place under their own power. In order to meet the rules of the Challenge, all of the cars must be owned by club members and driven to the parking space so we set the record at 124 cars.

With all cars in place, a photo was taken from both ends of Main Street to record the event. Marilyn Kuban was in charge of photography and arranged for a bucket truck, but she relegated the actual bucket truck photo opportunities to someone else. Afterwards, I wrote an account of the day and the club reporter, submitted the story and photos to both national Model A magazines, The Restorer and The Model “A” News. Each one, unbeknownst to the other, used the Main Street photos for front and rear covers of their November / December issues, the first and only time that has ever occurred. The Restorer used the Wisconsin Chapter story to lead in to the Fort Worth Club’s accomplishment.

From the early 1990’s until his untimely death in 2010, the event was coordinated by Don Currie. Beginning with the 2010 meeting, Randy Minton has been serving as Coordinator.

The Grandparent’s Day Celebration has become an annual event, being held every year but one since 1985. In the early 1990’s, the venue was changed from Sundance Square to the Fort Worth Stockyards. The event is now an open car show, but the Model “A” Fords are still the prevalent vehicle and hold the center of attention. We hope to see yours there this year.